Version 7.0 of the PC software and version 3.0 of the firmware are now available.

Version 7.0 should be used with firmware version 3.0.

Version 3.0 of the firmware will not work with previous versions of the SDI-12 Verifier's PC software.

The installation of PC Software version 7.0 will automatically replace prior versions of the program.

Use of this software requires a license. A trial period is available upon request.

Numerous screen shots of the new features in Version 7.0 and Version 3.0 of the firmware are now posted on the sample screens page.

The problem was that the Verifier's PC software failed to run when the regional settings on a PC were set to certain Asian languages.
Support for testing SDI-12 Version 1.4 is still in progress.

The SDI-12 Support Group has released Version 1.4 of the SDI-12 Specification, adding high volume commands and metadata commands to SDI-12. We are upgrading the SDI-12 Verifier to test these new SDI-12 features. The upgrade will be ready as soon as possible.

Released version 6.1.1.0 of the PC Software. This version:

Released version 2.34 of the firmware. This corrects an error in which the sensor simulation mode limited the number of data values to 20, rather than 99, when simulating a sensor and getting the data values from a pattern file on the PC.

The SDI-12 Support Group has announced that four additions have been made to the SDI-12 Specification (See www.sdi-12.org/announcements.php for more details.):

We have started work on upgrading the SDI-12 Verifier to test the new commands.

Released version 2.33 of the firmware. This corrects an intermittent error in which some time stamps, in the monitor mode, were incorrect.

Unlike with all prior versions of the PC software for the SDI-12 Verifier, Version 6.0 is licensed. One license is included with the purchase of an SDI-12 Verifier (price).

If you already have an SDI-12 Verifier, a 30 day trial version of 6.0 is available to download.

Please be advised that installing version 6.0 will remove version 5.1 from your PC. Version 5.1, however, will still be available to download and reinstall, at no charge.

Version 6.0 will soon be released. It has been out for beta test since November. We are now taking the final steps to prepare it for release.

Version 6.0 is still out for beta test by three companies that make SDI-12 products. So far so good. They have so far reported only minor problems with version 6.0 of the Verifier's PC sofware.

Depending on the comments we receive from the beta testers, we plan to release it in mid November. There will be no more long delays.

Added a digital signature to the installation program for the SDI-12 Verifier PC software to identify NR Systems, Inc. as the publisher.

Digital signatures will be added to other downloads, as appropriate, soon.

Version 2.2 of the firmware for the SDI-12 Verifier is now available on the downloads page.

Version 2.2 replaces version 2.1. An error was found and corrected. In some cases when a sensor did not respond successfully to a measurement command, and when a ttt value was greater than zero, the Verifier falsely indicated success. It also failed to display information about the command/response transaction. Question marks (?) for the results and zero for all of the timing measurements were displayed rather than the actual results.

This error was introduced when version 2.0 was released last August. This screen image shows the problem: 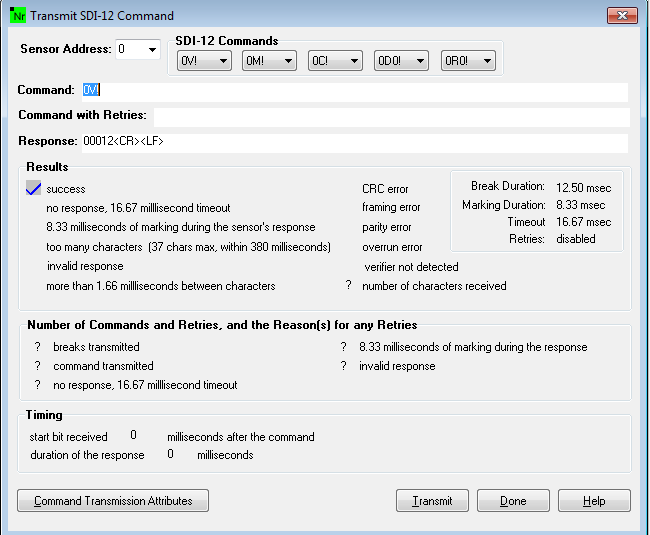 Version 2.1 of the firmware for the SDI-12 Verifier is now available on the downloads page. Version 2.1 replaces version 2.0. An error was found and corrected in the monitor mode. The delta time stamp for a service request was incorrect when the ttt value, in response to an M or MC command, was greater than 60 seconds.

Version 2.0 of the firmware for the SDI-12 Verifier is now available on the downloads page.

Version 2.0 corrects memory problems which were discovered in versions 1.7 and 1.71. This resulted in unpredictable results in the concurrent command measurement test.

Version 2.0 also adds support to test up to 99 data values returned by sensors in response to the concurrent measurement commands. The shipping version of the software (5.1), however, limits the testing to 20 data values. When version 6.0 of the PC software is ready, and used with version 2.0 of the firmware, that limit will go away.

The maximum number of characters that can be in a measurement/parameter is nine. The limit of 360 is derived as: 9 * 40 = 360. More data values are simulated and saved when there are less than nine characters in the data values.

Version 1.71 of the firmware for the SDI-12 Verifier is now available on the downloads page.

After the release of version 1.7 on May 1, an error was discovered and corrected. The error was present only when using the Verifier's PC software in the data recorder mode. The problem was that some responses to D commands were incomplete when multiple measurements were being returned in response to the D commands.

Upgraded the SDI-12 Verifier firmware loader program from version 1.0 to 1.1.

Version 1.0 only listed virtual com ports 1 to 50, precluding the ability to use com ports greater than 50.

Version 1.7 of the firmware for the SDI-12 Verifier is now available on the downloads page.

Version 1.7 of the firmware for the SDI-12 Verifier is done. It has passed all of our testing. We are, however, posting it as a beta version for a short period. It is available on the downloads page. This version works with the shipping version (5.1) of the PC software. It will also work with the Version 6.0, which will be ready soon.

Version 1.7 of the firmware has the following improvements and corrections:

Version 1.7 of the firmware is still under test. Pending test results, it will be released soon.

We have missed this scheduled release date. This project is simply taking longer than estimated.

Version 1.7 of the firmware is done, but it is still under test. We are pushing its release forward by one week, pending the test results.

New versions of the firmware (version 1.7) are scheduled for release on or before February 18, 2013.

This upcoming version will have numerous enhancements and corrections made in response to many comments received over the last two years.

Released version 5.1.0.4 of the PC Software. This is a minor upgrade. Corrected an error in which the PC software failed to close when running on Windows XP or Windows Vista, on user accounts without administrative privileges.

Released version 5.1.0.3 of the PC Software, which has the following improvements and features:

Released version 5.0 of the PC Software and version 1.6 of the firmware, which have the following improvements and features:

March, 2007. Released the third generation of the hardware: